Breaking the record, B-KOO Inspiration is Hong Kong’s FIRST homebuilt and locally registered aircraft to complete a 3-month Round the World journey, with Hong Kong as the starting and ending destination.

Since 28 August 2016, Inspiration has travelled approximately 50,000km around the world, stopping in 45 airports in 20 countries along the way, including the Philippines, Australia, the Pacific Islands, U.S.A, Portugal, Jordan, Pakistan, Thailand and many more!

Inspiration has carried the spirit of Hong Kong around the world – spreading Hong Kong’s dream, receiving tremendous support from various cultures, sparking up conversations in different parts of the world and gaining a lot of genuine interest and international attention.

We would like to take this opportunity to thank all of our sponsors – especially Cathay Pacific Airways Limited, K. Wah International Holdings Limited, Shell Hong Kong Limited, Hong Kong Aircraft Engineering Company Limited and Arbutus – the Round the World Journey would not have happened without them. Finally, we would also like to thank Hong Kong Civil Aviation Department and relevant government bodies for their supports.

Round the World Journey

Throughout the entire journey, the greatest challenge to overcome is weather. A few times Hank had to choose to fly to another destination or delay the flight due to chilly winds, heavy snow or typhoons – the risk was just not worth it. The team has not encountered any technical problems and there were no human factor issues that affected the journey.

According to Hank, the most exciting flight was from Hilo, Hawaii, to San Carlos, USA. The flight time lasted for 14hrs 37mins, covering a distance of almost 3,800km across the Pacific Ocean with no stops and no land in between! Hank was really glad after he has successfully completed this exciting route. It was a lucky that he has “developed a trusty relationship with the plane”, where he understood the plane’s performance and limit and felt completely confident with this flight.

In order to prepare for such an exciting route, Hank has performed extensive research prior to flight and consolidated all information and advice from people who have previously taken on this challenge. Some people have shared their concerns about fuel and aircraft reliability issues, however, Hank has run through check lists to fully and mentally prepare himself for any possible outcomes before bravely starting this route.

Each sector had its own unique character and all views were really captivating, especially flying over the European Alps, Middle East and Sri Lanka.

On the route from Jordan to Bahrain, Hank and a very special passenger – Christopher Gibbs Cathay Pacific Airways Engineering Director – flew over Qatar, the Persian Gulf and the Oman desert to Muscat. “The desert scenery was stunning – no tall sand, as you might expect, but with rocky mountains rising up to 5,000ft.” Chris says.

The Inspiration team was led through the Boeing Factory in Everett, USA, and was also given a private tour of the Airbus Factor in Toulouse, France. Locals from the Middle East were very friendly, and have invited Hank to their homes and treated Hank as if he was their own private guests.

Hank has learned a lot about the unique custom and tradition in the Pacific Islands, especially in Espiritu Santo Island and Christmas Island. Conversations with locals has sparked up a lot of interests and everyone are genuinely curious about what his project is about. “Their eyes were literally glowing as I was describing this project from Hong Kong” says Hank.

Hank received a very warm welcome from the Air Traffic Control in Azores Island, Portugal, where the Air Traffic Controllers greeted Hank by ending official airport clearance directions with “Have a great journey, Mr. Cheng!” This goes to show that the locals knows about the significance of the aircraft “B-KOO” and read all about it.

Hank was recognized by the same group of people on the island, where they took group pictures and had a really memorable conversation. This is when the team realized that the Inspiration project is not just a Hong Kong project, but was able to connect with people around the world, and that we are accomplishing something bigger than Hong Kong and inspiring many people around the world.

There were not much engineering challenge throughout the journey. Hank did not report any abnormalities during flight and the aircraft was found to have been maintained in good condition throughout its planned maintenance schedule. 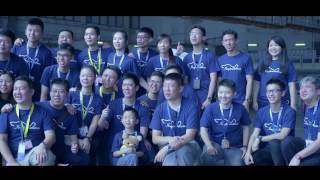